“Don’t tell Bamboo that I helped you.” He said he would get suspended if our hostel found out he helped us because they want visitors to get advice and to spend money there. We swore we wouldn’t say a word.

He caught us on our way out of Bamboo asking if we needed a taxi. We wanted to visit the Hindu temple in Nadi, (the largest Hindu temple in the Southern Hemisphere) so we took him up on his offer. He looked at me in the rearview and asked me the typical questions tourists get while in Fiji: where are you from and how long are you in Fiji. We went through our story: a 15-week trip starting here, revisiting Fiji to show David where I visited once before. He introduced himself: “Khan, it’s a Muslim name.”

He asked if we were going to visit any of the islands (a very common question when you’re in Nadi). I explained we were going to Naviti Island in the Yasawa Group to stay at Botaira Resort and to visit So So Village to see my host family from three years ago. “Do you remember their names?” I responded proudly with a “yep” and “Kiti and Kelera Vuluma.”

“Do you have your sevusevu?” The word sounded familiar, but I had to ask what it was. “Your gift. To the family. Since you are coming back.”

From that point on, Khan was our guide and much more than our taxi driver. He knew we wanted to go to the temple, so we went there first. He showed us to the office and helped to get me a sarong for my waist and a cover for my shoulders. I had completely forgotten that as a woman inside the temple, you are not allowed to show any leg above the knee or any shoulder.

Khan corrected the office attendant when he accidently said $15 instead of $7 for the entrance fee. He showed us where to put our shoes (also, no shoes for anyone inside the temple). He waited the half an hour for us to tour through.

Since I visited in 2010, the outside of the temple has been repainted, many of the paintings inside are new, and it’s all vibrant and beautiful with color. I almost cried at how thankful I was to have been there before – and that I was able to return. 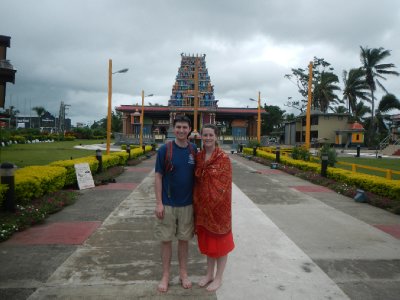 Khan took our picture when we were ready to leave. We grabbed our shoes, returned the sarong and cover up, and got inside the taxi headed for an ATM. Khan noted the good timing as four or five tour buses full of Caucasians and Asians parked in the gravel parking lot in front of the temple. I took this opportunity to ask Khan a very honest question. “Khan, do you think American tourists are more obnoxious than others?” He gave me a quick glance in the rearview.

My question came from the night before with Travis and Sam. We were eating dinner at Bamboo when a loud group of people came from a bus and sat down behind us. The majority of the group was American. Travis said he traveled once with a group that he was embarrassed to be a part of, and I said the same of some people from my study abroad group in 2010. Both of us recalled times when our groups were buzzing clouds of loud conversation and disregard for others. Travis said he knew this group was American because they were speaking so many decibels above everyone else (the accents helped, too).

Khan never acknowledged my question. He only commented again at the number of tour buses arriving. We went through the roundabout in front of the temple pulling onto a straight road. Khan said, “While we’re here,” parked and hopped out of the taxi. He returned 30 seconds later with a bouquet of kava wrapped like we in the US would wrap flowers. He took us inside the small pool hall and showed us $5, $10, $20, $30 and $40 options. He said this was the traditional way to present a sevusevu. I reminded him we needed to go to an ATM, and he said not to worry. He would cover it until we could pay him back.

When we got to the ATM, I asked again for the word he used earlier. I had my notebook out and ready. “Will you spell it?” He spelled sevusevu and turned halfway around. “Smart girl. Writing it down.”

I thought we were headed back towards Bamboo when I saw a dress shop. He said we could go in but he passed it, parking at the grocery store. He took the kava from me and put it in the trunk out of sight. He marched into the grocery store, grabbed a cart and started shopping. He picked out powered milk, instant noodles, two cans of mackerel in tomato sauce, British blend tea and breakfast crackers. He spoke about how you can’t get these things on the island and Kiti and Kelera will appreciate them. 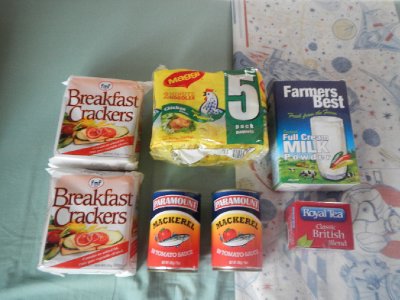 Khan put the grocery bags in the trunk with the kava while David and I walked across the street to the dress shop. I had been… almost… confused. I knew Khan had nothing to gain from this. He paid for the kava, and we hadn’t paid him back yet. He picked out the groceries; and I said to David before we crossed the road how he could just drive away with it all. But…although I didn’t know this man…I trusted him. A lot.

Khan joined us in the dress shop speaking Fijian to the owner, who David later recalled, didn’t look too happy that Khan was there. The only word I knew at the time was “Bamboo.” I picked out a dress, and the owner sold it to me for half price.

We got into the car, this time truly headed back to the hostel. Khan said outright that he told the shopkeeper not to treat us as tourists. We were staying at Bamboo. Don’t rip us off. And most importantly, we were with him. Khan said he has been a taxi driver for 32 years, and he has never overcharged anyone for anything. He has done his best to earn business by helping people. “You don’t become a millionaire overnight.”

Khan told us stories about past clients; in particular, one about a “gringo” girl who yelled at him for charging her $15 for a ride when she claimed it should have only been $5. She knew this because she had been living in Fiji for six months, and she knew what that ride was worth. By the end of the trip, she paid him $20 and apologized.

I told Khan how happy I was to see Kiti and Kelera again, and I thanked him for all his help. He said Kiti and Kelera would seat us in a place of honor when we get there. “Just wait to see how they treat you.” I told him how excited I was. “You will have a good trip, Sharon.”

Khan dropped us off at Bamboo. He asked if I was excited for the next day, going to Botaira and seeing my host family again. I said yes and thanked him once again for all his help. He responded, “Sometimes, you need someone to show you the way.”

Previous Next Table of contents

you were blessed to get that taxi driver for sure and he helped you with the unknown customs/
I am a Canadian from England in terms of your question of Americans as tourists. In Wales we were on a bus , most from the States and rest of us from other parts of the word. All was quiet as we went over a bridge as it was narrow, raining yet very bright sun hitting the window. The driver lowered a bamboo shade on the right, All of a sudden a loud American voice boomed out , driver I cannot see ahead , raise that screen.
The driver responded of course but if I do , you will not have to worry about seeing again.

Was that all Americans on the bus , no , but that couple certainly gave a bad impression. In the news today a senior minister from China has requested Chinese when visiting other countries to stop from talking out loud on trains, buses , planes and to wait their turn.
So when in Rome be part of it but do not be the exception remembered in a bad way I guess
Cheers

Thanks RobBar! We were definitely blessed! Our trip has been full of strangers helping us for no reason and it'sade a lasting impact on how I see people in general.

Comments on this blog entry are now closed to non-Travellerspoint members. You can still leave a comment if you are a member of Travellerspoint.

If you aren't a member of Travellerspoint yet, you can join for free.