Everyone greets you with "Bula!" which literally means "health" and is used to say hello.

We said goodbye to our families, had a farewell lunch at Chick-fil-A, hopped on the plane, and we were on our way to our first stop: Nadi, Fiji. It was all very surreal. We knew we were leaving for fifteen weeks but somehow, we didn’t know or didn’t understand. It felt like a regular day. Nothing different. Just same old, same old.

The flight, although it was only five hours, was long. Screaming children make any flight a long flight. But I made friends with our neighbor, the wife of Tampa Bay Rays first baseman (which is explains the GARGANTUAN rock on her left hand); and I also made friends with our flight attendant who later in the flight offered us free drinks. That beer helped quite nicely.

The flight attendant, Lisa, was the second person to tell us we “inspired” her by what we were doing. She was somehow encouraged that we were taking such a long trip. In fact, everyone we talked to was surprised. It was nice to be encouraged… and somehow to also be envied simultaneously.

The flight to Nadi was a long eleven hours. Our hostel picked us up in the Nadi airport at 5:30 am along with two other Americans named Travis and Samantha, aka Sam. Sam is recent graduate and journalist who loves travel and adventure journalism although she works for a political writer in DC. She heard about a man who started scuba diving resorts and owns Namena Island in Fiji. He decided he wanted to create his own resort in his 20s, picked up and went. He’s 80 now and moving back home to the US (this is the abridged version, btw). She just decided she wanted to write a story about it – so she hopped on a plane and went! I thought about how amazing it was that she just decided to go. I had the thought, “I would never do something like that,” but then I realized, I’m in Fiji – on a round the world trip – that I put together – in 6 weeks. Maybe I would do that.

David and I spent most of our day with Travis and Sam at Bamboo Hostel located outside the city center of Nadi. It was nice to meet other Americans traveling. After speaking with several other travelers at Bamboo, they could be two of the very few Americans we meet during the course of the whole trip. We met two Swiss girls who’ve been traveling for eight months and have four more to go. They’ve met three Americans in those eight months. Only three. I’ve come to the opinion that Americans don’t travel. It’s just not in our culture to do trips like this. 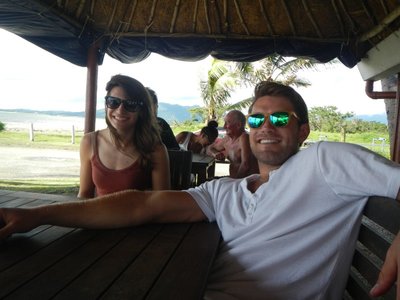 We did meet one other American our last night at Bamboo (after staying at Botaira resort for five days). He lives in New York and has a house in Dunwoody, GA. I have no clue how that meeting happened. Small world, right?

We also met an Italian guy named Francesco. His family owns a restaurant in Cortona, where, as luck would have it, The University of Georgia takes students every summer to learn the language. He joked that we would probably have a few mutual friends on Facebook since he meets so many UGA girls (and guys, but his emphasis was on the girls) every year.

All this sounds exciting, but honestly, when we first arrived to Bamboo, I thought, “What have we gotten ourselves into?” It wasn’t exactly clean. The metal bunk beds creaked. It was hot. It was humid. We had a room with 6 other people. But somehow, it soon became homey. We met so many people in just two nights. We made friends with a British guy named Hugo who told hilarious stories including one about a guy he briefly traveled with who he called “Dutchy” because according to Hugo, you get to a point where you just can’t remember all the names of the hundreds of people you meet. We made friends with an extremely nice German guy named Pius. And we continued to hang out with Francesco and Travis (Sam left after the first night). Everyone talked to everyone. The hostel sold dinner, we sat with strangers, had conversations, and everyone asked where you’re from, how long you’ve been traveling and how much longer you had to go. It was a small family. Plus, we all had kava with the staff after dinner. 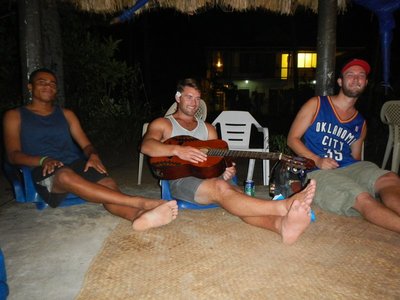 Kava is a very mildly intoxicating beverage made from the kava plant root. It’s used in formal ceremonies for Fijians and is a large part of their culture. It also tastes like dirt. It makes your tongue go dumb, and according to Fijians, the brain is eventually sure to follow (if you have enough – when I say very mildly, I mean very, very mildly). It was like nights I’ve had in the South when it’s hot, everyone has a beer, and someone is the around the campfire (substitute kava bowl or “tanoa” here) playing a guitar. That was our nights at Bamboo. And it was lovely.

After the initial shock wore off, David and I were extremely excited about our trip. We had already made friends and felt very welcome and like family at the hostel. Since every day still felt like just a regular day, David and I repeated to each other, “Hey! Guess what? We’re in Fiji!” because somehow, even once we were there, it was still unbelievable.

Next Table of contents

Comments on this blog entry are now closed to non-Travellerspoint members. You can still leave a comment if you are a member of Travellerspoint.

If you aren't a member of Travellerspoint yet, you can join for free.